Happy Holidays!  I have had some time testing and updating code for the LuxRender Converter.  As is the case with any programming, when you update something, you invariably break something that worked before.  The only way to solve this is just to keep debugging and testing.  I have had great feedback from the BlenderArtists community, and example files were suggested to test the Add-on tool and I am most grateful.  The only way to get code bullet-proof is trial and error and more testing.  I have added more capabilities in the conversion code – namely:

Tested the conversion tool with some of the most materials and object filled scenes I have dealt with (just parsing the file took 16 minutes) in a model file.  That one was the real brute force test – here, called Piper’s Alley.   I was able to enhance the code to process that large file without issue.  Searching through the Web, there are a number of models to download to test.  Below is an OBJ scene created by ‘3DRegenerator‘, a Marvel character display essentially.  No preparation was done to the file, except for placing figures in scene.  The Lux Converter was run and the result is shown here.  I added a city model in background for visibility through windows.

Before uploading updates and tweaks, I wanted to test again a complete scene exported from DAZ3D.  This one had 3 human figures for testing skin conversion as well as other materials.  This was a complete scene and figures were just thrown together in an environment (I believe one that came with DAZ 4.X).  The goal here was to see if the Converter could catch all the materials both on male and female characters with some materials (like hair style) sharing the same base.  Most importantly for test was to see if it could handle transparency maps for hair and eyelashes, etc.  Those materials never import into Blender or Vue properly.  I think the McTeleBlender script(s) do that transparency conversion, but haven’t tried in years.  This Conversion Tool is Luxrender specific and assumes that the materials in Blender Internal before conversion are what is intended.  Here is the test result: 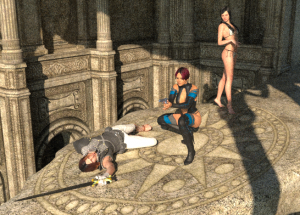 The eyelashes and hair converted perfectly (as well as they can be for that type of hair simulation).  I will continue to test OBJ, 3DS, DAE, and other model formats that get imported into Blender for misfires, but I am quite happy with the output at this time.  It is waaaay better than building materials in LuxBlend individually!!

The latest Add-on can be found here:   LuxRender Converter for Blender (version 1.5.4)